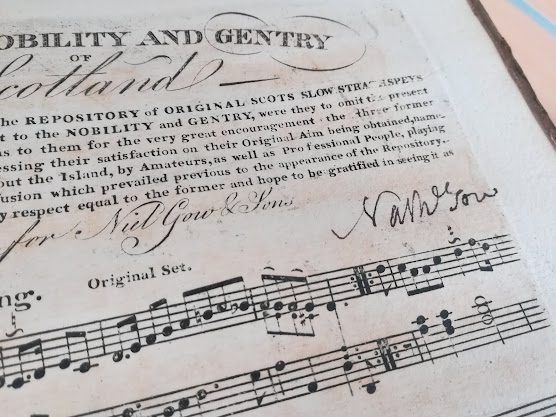 Today, after a slightly reluctant awakening, I headed to the Edinburgh University Library, which is a 40-minute walk from my flat, all of it uphill! The Special Collections is on the sixth floor of the main library, and by this point I was thankful for the lift... I had never been to Edinburgh University before, and really loved the campus: actually, I felt quite relieved to be on a university campus again, as I haven't actually been to my own university, Southampton, since March 2020. I have missed Southampton so much during the pandemic: even though I was commuting from London, I was so enjoying getting stuck in to the life of the Music department, attending seminars and making new friends. I hope I can get back to Southampton this autumn, as I start the third year of my PhD.
At the library, I was welcomed with a smile, and my material was waiting for me as usual. I was looking at two groups of items today: the first, some of the very well-known publications of Strathspeys, Reels, etc, by Niel Gow, the Scottish fiddler, and one of his sons, Nathaniel Gow. Not everyone, though, knows that Niel Gow had three more sons, William, Andrew and John, all of whom also pursued careers in music. Andrew and John headed to London, where they set up a music shop together, although sadly Andrew died shortly afterwards. John continued the business alone, until his own son joined him in the business. Many of the Gow publications were also available in London at John Gow's shop, where they would have been incredibly popular in polite society, ravenous in the late eighteenth-century for Scottish and Scottish-inspired music. In the next few months, I'm looking forward to finding out more about John Gow's Scottish activities in London, and to fleshing out his career throughout the last couple of chapters of my thesis.
For the rest of my session, I looked at several records relating to the Edinburgh Musical Society. If it seems that I have worked on the EMS most days of this research trip, you would be right. Somewhat strangely, documents related to the society have ended up in different places: Receipts and Accounts are part of the Innes Papers, held at the National Records; an index of music and the Plan Books (containing concert programmes from the 1760s-1780s) are held at the University Library, and the Minute Books, and another index at the Edinburgh Public Libraries. I'm so delighted that all of these various institutions have actually let me visit on this trip, as it means that I will be able to write up the relevant chapter without having to leave any awkward gaps. Today I took photographs of the index and the plan books, as they will require much more detailed analysis over the coming weeks. It's amazing that the proposed programmes for so many of the concerts have survived, written often hurriedly in small notebooks. With these, we can analysis which pieces were most popular during particular periods, how much new music was performed, and how the concerts were typically structured. Fascinating!
Having finished my research two hours early (a first!), I headed straight for a little coffee shop just off campus. I had spotted it on my way there, and was attracted by the cakes in the window, and the smell of coffee emanating from within. I don't really drink coffee, as I'm not very keen on the taste, but somehow there is something about the whiff of it on the warm air that is incredibly inviting. The place is called Terra Coffee, and only opened last month: I can thoroughly recommend it. I enjoyed a delicious sourdough toastie with feta and pepper, an uncharacteristic Latte, then two cannolli (pistachio and chocolate) and a chamomile tea (over three hours). During that time I managed to finishing labelling and filing every photo that I have taken on this trip (over 1,800) and backed them up. The next few weeks will be spent actually looking in detail at many of the photos taken, and working all this new material into existing chapters of my thesis.
This has been a wonderful trip, but after seven days in archives and libraries, I have started to develop some research-related aches and pains. Slight headaches, which disappear as soon as I stop peering at eighteenth-century handwriting, and a strange ache in my left arm that I realised today was caused by holding volumes open with my left hand while taking photographs with my phone in my right hand. My left lower back also hurts, as my posture when typing is necessarily pretty terrible, as I need to have the laptop on the diagonal to be able to see both it and the material at once. Fortunately, though, as I have walked at least half an hour in the morning and evening every day, I have been able to keep relatively fit, though I must admit this was offset on one evening by a Dominos pizza. Tomorrow, just two more hours of research, and I'll be headed home to London, just in time to get my second Pfizer vaccination on Thursday morning. Once I'm double-vaccinated, I'll be allowed to travel to and from the Netherlands with my ensemble at the end of August, to perform at the Utrecht Early Music Fringe Festival, and compete in the Van Wassenaer Competition! Onwards and upwards.
Cheerio the nou,