The Long and Winding Road: Please observe the Fortes and Pianos!

Well, December got rather busy! Concert life was naturally a bit hectic at the beginning of the month with my group Ensemble Hesperi, and then I had a bit of an energy crash afterwards. But, as everything quietened down this week, and e-mail traffic has died down, I've finally been able to spend a few peaceful days at home, with the Christmas tree and my PhD.

This week, I've been planning a conference paper ahead of the British Society of Eighteenth-Century Studies (BSECS) annual conference at the beginning of January. During a PhD, it's a really good idea to present at a few conferences; it's a great opportunity to meet like-minded people, but also to get really valuable feedback on your ideas, and to get a sense of where your research fits into the field. The BSECS conference is a highlight of my year; it is extremely welcoming to postgraduate students and early career researchers, and there are plenty of opportunities to get involved. This is the first in-person conference since the pandemic, and I'm so much looking forward to meeting many friends and colleagues who have till now been squares on a Zoom call!

My paper this year will focus on one of my Scottish musicians in London, Robert Bremner (1713-1789). Very little has been written about Bremner, perhaps because he is often pigeon-holed as a publisher (and therefore a businessman) rather than a musician or composer in his own right. He's also a little unpopular in some quarters because he is seen as having promoted 'foreign' music over and above traditional Scottish music (something I'm planning to argue against to some extent). More on that thorny subject another time...  At the moment, I'm really fascinated by Bremner's role in facilitating the movement of music and musicians between Edinburgh and London in the 1760s and 1770s. Bremner had a long career in Edinburgh before he took his business to London, teaching music for some decades before opening a music shop, and performing regularly, with his brother James, for the orchestra of the Edinburgh Musical Society. In the late 1750s, Bremner was visiting London often, to source the best musical instruments for his affluent clients in Edinburgh, and to source the latest music for the EMS. In 1762, it must have become more practical for him, and, somewhat amazingly, he advertised on 4th December in the Caledonian Mercury, explaining his reason for moving to London. It's on the left!

When Bremner arrived in London, he opened a new branch of his business on the Strand, while his associate, John Brysson, continued to run the Edinburgh shop. Despite living in London, Bremner was still focused in many ways on all things music and all things Scottish. As soon as he arrived, he joined the congregation of Crown Court Church, Covent Garden, which today remains a religious home for the Scots diaspora community in London. He also remained in very close contact with the EMS, sourcing new music for them from London and other European capitals, and acting as an agent when the society needed a new singer/violinist/chorus master, etc. Clearly a networker extraordinaire, Bremner moved in the same circles as J.C. Bach and C.F. Abel, and was able to guarantee the quality of musicians to Edinburgh through their personal recommendations. So, this week, I was revisiting some of the material I collected at Edinburgh Public Libraries last year, particularly the Minute Books of the Edinburgh Musical Society, which contain several letters to and from Bremner in London. When I was consulting these the first time round, we were still pretty deep in Covid regulations, and I had only a 2 hour slot in the library to consult 4 huge tomes: a you can imagine, I was grateful that I was allowed to talk as many images as I wanted! So now I can revisit those, and it’s lovely to be reminded of happy (if pressured) times in the archive last year.

One of the challenges when consulting historic documents is the temptation to read parts you don't technically need to, because they look so interesting! I have found this to be very much the case with the Edinburgh Musical Society records, because much of the story of Edinburgh's eighteenth-century musical life can be found in the Minutes and Accounts. I’m always struck by the fact that organisations like this face very similar issues to today… The other day, I came across a Minute which addressed an issue of musical quality within the society’s orchestra. The orchestra was composed of ‘Masters’ (professional musicians) and ‘Gentlemen’ (wealthy amateurs presumably of varying degrees of musical competency!), and the latter were causing some difficulty: 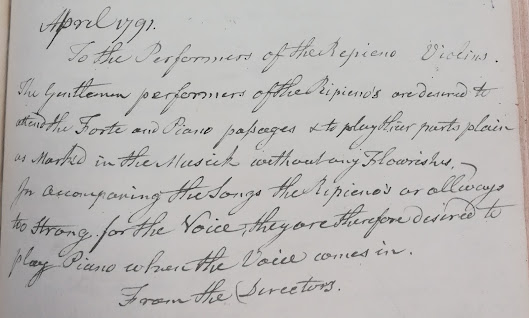 [Transcription into modern English] April 1791: "To the Performers of the Ripieno Violins. The Gentlemen performers of the Ripienos are desired to attend the Forte and Piano passages & to play their parts plain as marked in the musick without any flourishes. In accompanying the songs, the Ripienos are always too strong for the Voice; they are therefore desired to play Piano when the Voice comes in. From the Directors."

Have a wonderful, peaceful Christmas - see you in 2023!